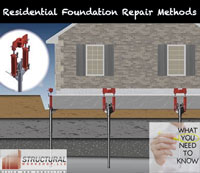 First and foremost, it needs to be determined if the walls are capable of supporting the loads on them both now and in the future. If they are not, immediate action should be taken.

The materials should be inspected for degradation to ensure the wall is capable of performing as designed. Minor cracks need to be addressed to prevent water infiltration and additional damage. Modifications to the house or changes on the property need to be considered to ensure that the walls are capable of supporting loads they may see in the future. The structure above should be capable of bracing the wall as it was intended and the connections should also ensure the support of the structure above. Lastly, and sometimes most important, is the cause of the problem. Countless homeowners have been ready to spend thousands of dollars on expensive reinforcing and waterproofing systems, only to have a broken drain pipe or similar simple problem identified. A ten dollar trip to the hardware store and a Saturday afternoon is sometimes all it takes to solve basement wall problems. There are more things that should be investigated, but in general, the Engineer should take a big picture approach. This can save the client a large amount of money upfront and also ensure that the repairs will last and perform as intended.

If excessive horizontal forces on a wall have caused damage or movement to the wall that compromise its integrity, the wall either will have to be reinforced or rebuilt. There are several methods of reinforcing a wall. In some cases, the wall is damaged beyond repair, or circumstances exist that make reinforcing impossible, impractical, or uneconomical. In these cases the wall must be rebuilt. This is generally done by temporarily supporting the framing above the wall, excavating to the bottom of the wall, demolishing the existing wall, and building a new wall.

In this case, it may be possible to only address the cause of the excessive force and repair cracks and material damage. If the wall is capable of supporting normal loading, it is usually much less expensive to return the loading to normal than to reinforce the wall.

In this case, the cause is irrelevant. The wall should be performing properly under the loading conditions and is not. Here, the wall will almost always need to be reinforced or replaced.

It is usually more cost effective to reinforce a wall, rather than rebuild it. There are two approaches to reinforcing a wall. The first involves installing tie-backs. Essentially, augers are installed into the soil behind the wall and attached to plates on the inside of the wall. This method does nothing to make the wall itself stronger, but it does take a portion of the loads on the wall and transfer them back into the soil. The second method involves reinforcing the wall itself. This can be done by building in pilasters, cutting and grouting reinforcement in, or by installing CRFP strips on the inside of the wall. Pilasters are “popouts” of reinforced masonry which serve as stiffened portions of the wall. Installing internal reinforcing after the fact basically puts the reinforcing that should have been in the wall there, but is much more complicated and expensive to do after the fact. CFRP strips are carbon fiber reinforced polymer strips that are epoxied to the inside of the wall and serve the same purpose as internal reinforcement, but avoid having to cut into the wall.

Material damage is generally repaired by replacing damaged material. If blocks are damaged, new blocks could be installed. The mortar joints could be cut out and new mortar installed. Cracks are sealed with mortar or epoxy injection.

The cause of excessive loading is typically water behind the wall. Simple causes like broken or misdirected downspouts and improper grading need to be addressed. Sometimes drainage systems are installed, either outside or in the basement. If the backfill is improper, it may need to be replaced.