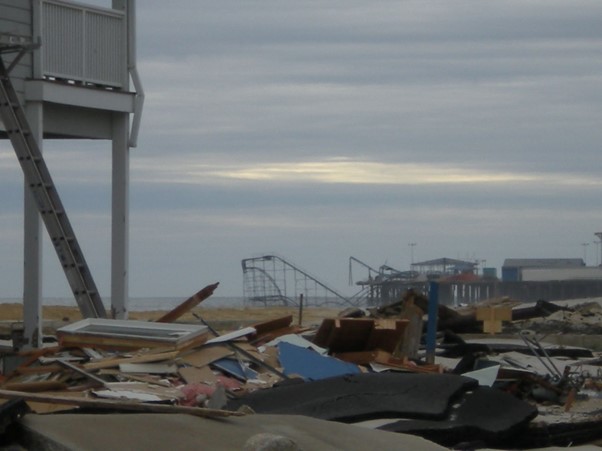 October 22nd marks 10 years since Superstorm Sandy made landfall in New Jersey. Structural Workshop President, Joe DiPompeo was immersed in the aftermath of Sandy in every way possible: As a resident and business owner in North Jersey, he lived through the power outages, gas shortages, inland flooding, and tree damage. As a lifelong Jersey Shore Vacationer and property owner, he saw the devastation to his beloved Jersey Shore up close. As a Structural Engineer, he was able to access the barrier islands right after the storm and also see most of the NJ coast and some NYC damaged areas. He also was heavily involved in the rebuild, as Structural Workshop was involved in the NJ RREM Rebuild Program and the NYC Build It Back Program. Structural Workshop also performed many forensic assessments of damaged properties and performed volunteer restoration work with the St. Bernard Project.

As Joe recounts, “I was assessing a shopping center out on the Brooklyn Coast the day they opened the bridges and on the New Jersey Coast a few days later. At the time, and within a few weeks of the storm, you needed to go through National Guard Checkpoints to get onto the barrier islands. You would leave your licence with them and pick it up on the way out so they could account for everyone. There was no power and no stores or anything open on the barrier islands. I saw just about every town from Union Beach to Beach Haven. It was very clear that the towns with higher dunes fared much better. It was also clear just how powerful mother nature is. After people started cleaning up, I remember piles of everything people owned stacked up in front of every house and a massive pile of garbage at the foot of the Tunney Mathis Bridge. Some areas had no houses left, some had houses strewn all over the place like they were toys, and the ones lucky enough to remain intact had all of their belongings destroyed.”

Above is pictured a house on the beach in Bay Head, its side porch ripped off by the storm. The house suffered severe damage but was still standing after the storm. Although the side porch was nowhere to be found, a bookshelf was still attached to the wall, and its books were still intact on this now-outdoor shelf.

Joe assessed damage in Bayhead, Union Beach, and Ortley Beach.  He witnessed further destruction, stating, “Union Beach was one of the only towns I did not see, as there was nothing left to see. Ortley Beach was the worst I saw.”

The beachfront block in Ortley Beach. The houses are gone. Black wavy pavement can be seen on the ground after being moved by the storm by great distances. Casino Pier and the Jet Star are pictured in the background.

The following example shows a modular house in Ortley Beach. It stayed intact but moved several lots down the block. Its original location was several lots to the right before the storm.

Pictured above is the interior of the modular home. Although it mainly stayed intact, after the neighboring building was utterly destroyed, a couch was carried by the water with such force that it came through the window.

The beachfront in Ortley Beach was severely damaged in the wake of Hurricane Sandy. The darker sand in the background is the emergency dune that was installed. According to Joe, “You can see the amount of scouring and erosion on the fire hydrant and how mother nature played with the pavement like it was a toy.”

Today, the Jersey Shore is mostly rebuilt. There are some vacant lots here and there. The rebuilding took a long time, only in the past few years has it been completed. The road, water, sewer, and electric infrastructure is stronger than it was. The beaches have a larger, complete dune system. The beach gets eroded in storms, and people complain, but the beach and dunes are doing their job in taking the brunt of the ocean’s force and preventing property damage. Many people, through grants and insurance proceeds have ended up with much larger, nicer, and more valuable houses than they had before. But many people also were severely negatively affected and have not fully recovered.

Here are Joe’s Key takeways from the events of the past 10 Years: